introduce the design with the theme of good luck.

Introducing the meaning and origin of T-shirt designs popular among the foreign tourists.

The beckoning cat and other traditional designs that bring in luck is popular among Japanese and foreigners.


The Original Fortune Cat It brings great Fortunes,
From the old days the “Fortune Cat”have been widely favorized for business prosperitry,
family happiness,and the calling of many customers.

It is said that the Fortune Cat with it’s right paw brings a furtune of money.

The cat's hands are above the head. That means attracting wealth from a wider world.

1,Tsuru(Cranes) & Turtles
As "Tsuru(Cranes) is a millennium, turtles are a million years", both are representative of animals that live long. Tsuru(Cranes) are a happy couple, and turtles have good luck.

2,Pine, Bamboo and Plum (an auspicious grouping)
ShoChikuBai has been used since ancient times as a doll and has become an indispensable part of the celebration.
This is because the pine always keeps green, the bamboo grows up straight while being rich in elasticity, and the plum blossoms before the leaves in early spring, and it also produces medicinal fruits.

3,Rising Sun & Wave
The reason why the ocean is used as the background of Asahi is that the state of the waves, which sometimes changes quietly and sometimes vibrantly, resembles the world. Quiet waves represent home sufficiency, and rough waves represent the fulfillment of a great wish only after enduring trials.

Kanji is symbolic, or logographic. It is the most common means of written communication in the Japanese language, with more than 50,000 different symbols by some estimates. However, most Japanese can get by with using about 2,000 different kanji in everyday communication.

Samurai is Japanese warriors to serve their masters. It is also called Bushi.
The samurai is associated with the concept of bushido, “the way of the warrior” which emphasized duty, loyalty and virtue. Bushido stressed concepts such as loyalty to one’s master, self-discipline and respectful ethical behavior.

A ninja (Japanese pronunciation: [ɲiꜜɲdʑa]) or shinobi ( [ɕinobi]) was a covert agent or mercenary in feudal Japan. The functions of a ninja included espionage, deception, and surprise attacks.Their covert methods of waging irregular warfare were deemed dishonorable and beneath the honor of the samurai.
The word shinobi appears in the written record as far back as the late 8th century in poems in the Man'yōshū.The underlying connotation of shinobi means "to steal away; to hide" and—by extension—"to forbear", hence its association with stealth and invisibility.

First in sequence/number. Also the first one. The best one. Also, the most important thing. Best of all. most.

The word hiragana literally means "ordinary" or "simple" kana ("simple" originally as contrasted with kanji). Hiragana and katakana are both kana systems. With one or two minor exceptions, each syllable in the Japanese language (strictly, each mora) is represented by one character (or one digraph) in each system.

Kanji, katakana, and hiragana are used in this design.
In this design, the hiragana part means a refreshing city（さわやかシティ）, the katakana part is Tokyo（トウキョウ）, and the kanji part is the best in Tokyo（東京最高）.

The symbol mark of a social organization called the fire brigade of the Edo period in Japan. They put tattoos on their bodies and lived in fire and fights. Manly and popular.

Japanese design 100 years ago. It is Ukiyo-e. 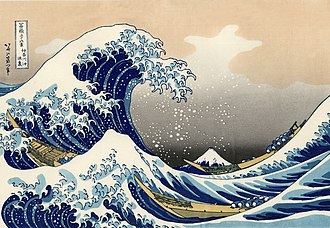 「HOKUSAI -The Great Waves off Kanagawa」

The Great Wave off Kanagawa also known as The Great Wave or simply The Wave, is a woodblock print by the Japanese ukiyo-e artist Hokusai. It was published sometime between 1829 and 1833 in the late Edo period as the first print in Hokusai's series Thirty-six Views of Mount Fuji. It is Hokusai's most famous work and is often considered the most recognizable work of Japanese art in the world.

「Takiyasha the Witch and the Skeleton Spectre」

This is a ukiyo-e woodblock triptych by Japanese artist Utagawa Kuniyoshi (1798–1861). Kuniyoshi was known for his depictions of historical and mythical scenes, and combined both in portraying the tenth-century princess Takiyasha summoning a skeleton spectre to frighten Ōya no Mitsukuni. 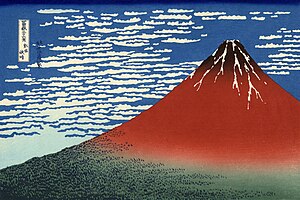 This is a wood block print by Japanese artist Hokusai (1760–1849), part of his Thirty-six Views of Mount Fuji series, dating from circa. 1830 to 1832. The work has been described as "one of the simplest and at the same time one of the most outstanding of all Japanese prints".

Our original designs such as the symbol of Japan and the map of Tokyo.

Kokeshi dolls are traditional toys in Japan. Edo period Japanese girl‘s hairstyle and clothes. Red is often used, but this is the color kids love. A typical one is wood. It is also used for pottery and design.

The two major towers in Tokyo are popular tourist destinations in the world. In addition, cute characters will be scattered around the design, and it will be one of the memories of your enjoyable trip in Tokyo. Our original design.

This is the most popular design of ours. The silhouette of the Japanese Hinomaru, Samurai, Sakura, and Waves is really simple, but it's a powerful design that reminds you the Japan at a glance.

We "Sparkle™" is an inbound souvenir shop in Asakusa, Tokyo.Musli…

Introduced in North America in 1984, it is now the world's leadin…

Sparkle has a wide selection of popular items in various designs.T-s…

T-shirts and souvenirs "SPARKLE" are also featured on TV.Introduc…

Information on tourism and trivia